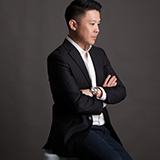 Prior to founding HighStreetStudio with Rama, he has gained professional experience in The United States, China, and Europe. Most notably his time with Mark Molen and April Yang, when he developed the infrastructures and airport designs in The United States and People's Republic of China.